Memorial Day Weekend my family took a long road trip deep into Tennessee. As I was packing I contemplated which devices to take with me and what apps I should play with as a real user on the go in various locations, with different connectivity signals, trying edge use cases and checking for information and other data. 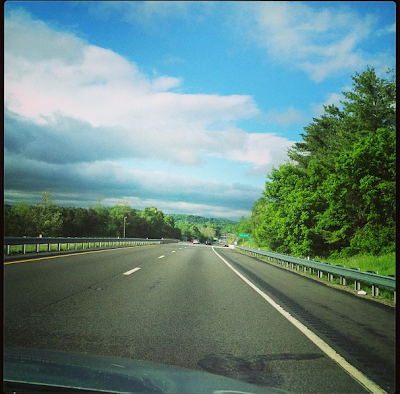 In addition I wanted to use the time to catch up with my Facebook, LinkedIn and Twitter feeds, listen to downloaded tutorials, read books, and take care of banking and finance as well as do a little bit of online shopping. We drove so that left us passengers with a lot of free time where things got mundane and boring pretty quickly. On top of it I had to keep our chauffeur engaged and awake and our son occupied so he would not whine.

As we got into our first long stretch, I started using all kinds of mobile apps. Some I have been using on occasion, others have been either recommended or stumbled across during my daily technology news discoveries.
We had 3 phones and an iPad at our disposal with a bunch of apps on all 4 devices.

We followed Google Maps on one of the Android phones and Waze on an iPhone all working on the Verizon Wireless network. The iPhone had to be plugged to charge as Waze was tough on the battery on 3G signal, especially when we were traveling through the mountains and some remote parts of TN with a weak cellular signal.

We also drove through a couple of really bad storms that put navigation and other apps to the real test. 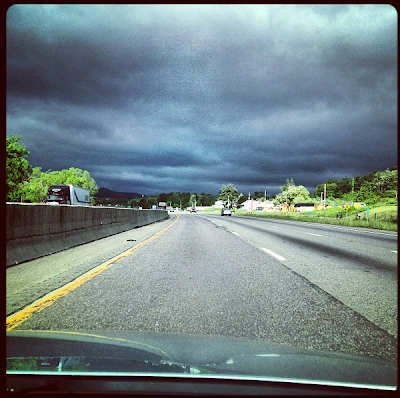 A few times roads and other landmarks just disappeared in both Google Maps and Waze so we used traditional paper maps for navigation. It seemed a bit strange, however, as we were traveling on one of the major/known highways at the time. 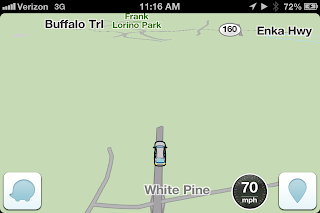 Waze seemed to have fewer such problems and also provided more accurate directions as well as warnings about road incidents (e.g., broken down cars) and police traps. Some things were reported inaccurately. For example, we expected to run into heavy traffic at a certain road stretch but there was no such thing.

We managed to get a speeding ticket after all... Either nobody noticed the police patrol car or did not report it or it just magically showed up on the side of the road. Still Waze seemed like a pretty cool and useful app. It also offered customizations, personalization, social and gaming (you can level up) attributes that made the app fun to use.

In addition to navigation apps we also used a police scanner app so a couple of times we overheard a conversation between dispatchers and police officers about accidents and what's going on in the area.
My son tried to watch one of his favorite shows on Netflix but it did not work on the 3G connection. He frequently watches shows on Roku and other devices while on WiFi with no major issues.  On 3G the app kept buffering and freezing every few minutes, and when it did work the audio and video were out of sync at times. The app was a huge resource hog and kept draining the phone battery even though it was plugged in. I wish Netflix worked better on a cellular data signal or had an offline download capability.

Shopping and social media activities worked pretty well for me. I got into a habit of checking out Amazon Today's deal and purchased a case of coconut water as a result. It was a pretty smooth and seamless shopping experience. I have been a frequent and long-time Amazon shopper and fan and started making more purchases via its mobile apps. I also searched for and added a few Skylanders action figures to my Ebay watch list and left feedback for sellers from whom I recently purchased a few items. It was pretty cool to be able to take care of these little activities while on the road.

Reading news turned out to be an audacious task as the apps' performances were slow and updates took forever to refresh and load so I eventually lost patience and only checked for breaking news when reminded by push notifications. 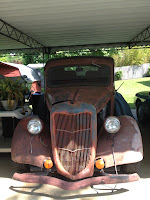 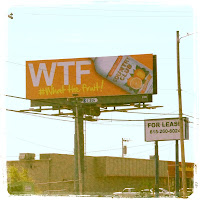 It was fun to do a Hangout with a co-worker, and a Skype talk session with my brother in Siberia. And even though the picture quality was a bit blotchy I was giddy as a child to be able to show my brother some of the local countryside we were traveling through.

Since it was a long trip we made stops to check out local places, take pictures, sample foods, coffee and ice cream.  We ended up staying in 3 different hotels and all three were selected based on available reviews on TripAdvisor and Yelp. 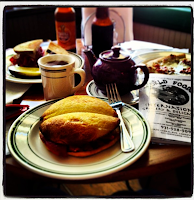 We also checked out a few restaurants and cafes recommended on Yelp. I was surprised however that the Yelp app did not allow you to post reviews directly from the app which did not make much business sense. I saved mine as drafts and went to the web site to finish them a week or two later. I wonder how many users are discouraged from leaving feedback reviews altogether from what seems to be a glaringly missing feature.

Via Bluetooth we streamed music from Pandora and Amazon Cloud Player, and listened to a couple of YouTube tutorials that I was able to cache in the PlayTube app. Unfortunately Google forced the video caching/offline download feature to be removed from the app so now I can only stream the same tutorials live.

A couple of general observations - most of the apps crashed at least once during use. The user was scrolling through feeds (e.g., Facebook, LinkedIn, Email), tapping to make a selection (Google Maps, Waze, Yelp) or inputting data (Ebay, Skype, PlayTube, CalenMob). There were also crashes that probably happened due to low memory, mobile signal radio frequency waves mid air collisions, weak signal and other exceptions. I did not investigate but read this article that summed up why most common crashes may occur - Demystifying iOS Application Crash Logs. 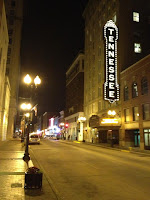 When you are traveling using mobile apps is a great way to pass time, explore local surroundings as well as test and try to figure out their 'fit for purpose' or 'fit for use' attributes and capabilities. We don’t always think about it but we test and evaluate different things every day. Whether it's an app, using a new gadget, checking out the new features on a TV or figuring out how to best grow an herb garden. It all involves testing and learning which I think is a lot of fun. I'd like to hear what experiences you all have with travelling and mobile apps.

Have a great Summer!
Posted by Lena at Monday, June 24, 2013
Email ThisBlogThis!Share to TwitterShare to FacebookShare to Pinterest

New comments are not allowed.