Big Book of Pictures and Puzzles

My son brought home a Big Book of Pictures and Puzzles that some fellow testers may find interesting. On the cover it says “With Over 4,000 Things To Spot”. The book contains pictures about different people and places from history such as early cities in Mesopotamia, Egyptian Pyramids, European castles in the Middle Ages and many others. It also has sections on the World, Castle and Dinosaur search. 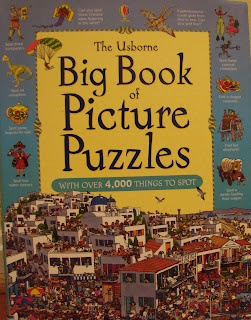 The drawings are pretty elaborate and frequently amusing. I was laughing so hard when I got to the Roman bath house pages! It showed a bunch of naked men figures with naked bottoms. Luckily all of the characters were placed in such a way that their groin area could not be seen. The men shown were swimming, diving, talking business, having massages and exercising. It was pretty entertaining! The artist was probably having a ball drawing this! 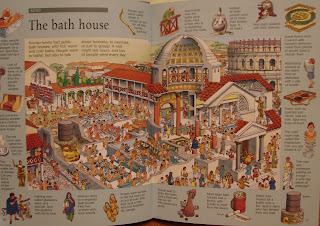 There were also a couple of pages on reindeer races in Siberia that I thought were pretty fun. Granted I have never seen anything like what is depicted in the picture while growing up in Siberia but who knows maybe there are similar places. 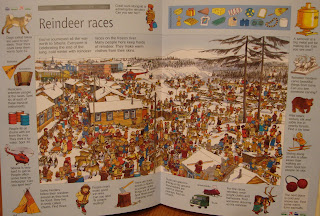 The author's first sentence puzzled me a bit – “You've journeyed all the way north to Siberia.” In fact Siberia is not just in the north of Russia. It covers a vast territory from the Ural Mountains to the Far East. It also said that “Siberia is very hard to get to. People always arrive there by helicopter”. One of the tasks is to spot a helicopter, however there are many different way to get to Siberia – by plane, train. Of course many have heard about the Trans-Siberian railroad.
OK, some facts are inaccurate but the puzzles are pretty fun. While I was looking and spotting things I could not help thinking about the real world of software testing and frequently generalized and inaccurate requirements and user stories. At least at the moment my son and I were having fun competing in who will find most of the hidden items and other things. And he found them before I did. Maybe another natural tester is growing up in the family.
Posted by Lena at Monday, September 27, 2010
Email ThisBlogThis!Share to TwitterShare to FacebookShare to Pinterest