A Birthday and a Gift

My son's birthday is in a few weeks and I have been thinking about a gift for him. I have also been reminiscing about our journey together.

It's been seven years since he came to live with us. Back then my mother was in charge of a baby home, an orphanage for babies and toddlers, in my hometown in Siberia. She and I usually catch up over a weekend and back then she would update me on what's going on with the babies, who started talking and walking and who found new families and share the stories of the newcomers. Some of those stories were heartbreaking. One of them was the story of my son.
He was dropped at one of the city's hospitals at the age of eight months by his grandmother who died from pneumonia within the next two weeks. Wicked luck. No family members stepped in to claim him. His biological mother's whereabouts were unknown. Hospital authorities did not know what to do with him so under different bureaucratic excuses they kept sending him from one medical facility to another.

Right after we adopted him I frequently wondered what he must have gone through. Did anyone care for him at those places, check on him when he was hungry or hold him when cried? I know how things were in Siberia. I grew up there. The social welfare system has always left much to be desired in Russia. At least he had a roof over his head and basic food and care. Eventually Joshua (his current name) ended up at a baby home where my mother worked. At the time things were a lot more favorable towards foreign adoptions so as a result many kids from that baby home acquired their new families and went to live in their new parents' respective countries. My mother was a big supporter of international adoption as well and she was hopeful that one day a nice family will come and get Josh.

I think by the time he got to the baby home he was over a year old. Mom did not know about him until they met when he was about 2 years old. As a doctor in charge she had to oversee daily operations and check up on all the children's age groups to verify all was going according to policy. Whenever mom visited Josh's group he would find a way to talk to her. Eventually he got very comfortable and started asking my mom when she would take him home. He told her that she would make a nice grandma for him. Even though she felt uncomfortable my mom was baffled by the fact that such a small child was so proactive about making his fate.

I was moved by the story. I called one of the agencies that worked with my mom's baby home to find out what's involved in getting a kid adopted from Russia - that kid. They promised to help.  I wanted to rescue him from Siberia but at the same time I was very anxious. I studied child psychology in college and worked with kids in summer camps but I had serious doubts that it would make me a good parent. I have never been the nurturing type - I am a geek! I like gadgets, video games, sports and stay-at-home moms intimidated me at the time. I was hoping that I would not have to deal with diapers as I had a couple of embarrassing experiences when my girlfriends were changing them. I threw up.

Anyway, we successfully adopted Joshua. He is very happy with us. My mom who visited just this month told me how much he has changed. He is an All-American boy. He loves sports, especially soccer. We play video games together and he gets disappointed when we beat him. He is of the opinion that parents are not supposed to win. We challenge each other with puzzles and with our strong personality types. There are weekends when I can hardly wait till Mondays. I feel exhausted after hours of Phase 10, Uno, Wii and other challenging parent-child interactions such as reasoning over chores and daily schedules. I feel complete however. We have lived through plenty of of ups and downs while bonding and adjusting to our new family, coping with ADHD and pressure from school. The most important thing is that we have each other, we are best friends and we are living to the fullest trying and learning new things.

Now if only I can find a kid size Chelsea soccer jacket for his birthday gift... It will make Joshua very happy. 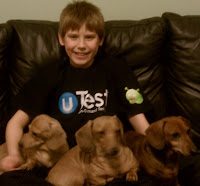 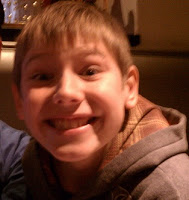 Posted by Lena at Sunday, January 30, 2011
Email ThisBlogThis!Share to TwitterShare to FacebookShare to Pinterest